The term “cognitive load” was originally coined by psychologists to describe the mental effort required to learn new information. In terms of User Experience design, cognitive load is the amount of mental effort required to operate a user interface system. Cognitive overload occurs when that effort exceeds a user’s ability to process information and keep track of their goals. When the amount of information users are presented is greater than their ability to process it, the user experience suffers.

Issues of cognitive load are connected to working memory, which is a cognitive system that allows us to simultaneously store and process current information. Working memory tends to accommodate between five and nine blocks of information at any given moment. The information that our brain processes gets put into categories in our working memory, where it’s then placed into our long-term memory and stored for later retrieval. The key in designing an intuitive and innovative user experience, then, is to avoid overloading the user’s working memory with extraneous information.

Avoiding cognitive overload, however, requires more than simply reducing the amount of information displayed on a user interface for users to process at any given moment. The amount of time and level of actions needed between a user’s starting point and their destination should always be minimized. However, reducing the number of options available in service of avoiding cognitive overload could result in a large gap between a user’s present situation and their desired goal. When that gap grows too large, it can also lead to overloading users’ working memory.

Minimizing cognitive load in UI design can be achieved through a variety of means: 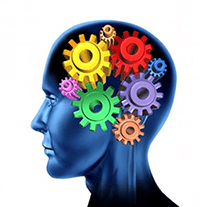